On October 20th Sunday, on a rather chilly and windy day that inevitably reminds one of the fast approaching winter season, our president David Ikeda and counsellor Kuge’s two daughters ran the full 5 km marathon at Scotiabank Toronto Waterfront Marathon 2019 to support JSS fundraising. To Kuge’s much disappointment who loves running marathon, he was unfortunately not able to run this year due to his knee injury. But his two daughters – 10-year-old Kanon & 8-year-old Yula – volunteered to take place of their daddy this year. All three runners did fantastic job and completed the 5km run in around 40 minutes. Our new champion runners – Kanon & Yula – will sure to be our star runners in the subsequent years to come. Let’s celebrate this great achievement and milestone in our annual Scotiabank Toronto Waterfront Marathon fundraising! 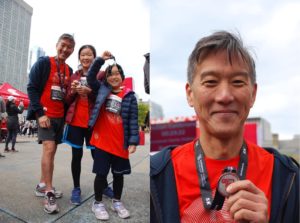