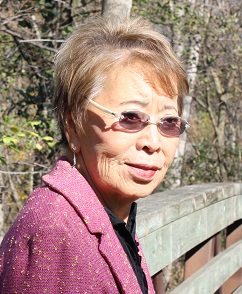 Junko Yamamoto, director at Japanese Social Services (JSS), has asked me to share my experience recovering from a stroke.

I have had a long life, and I had always prided myself on being free from illness. Without warning, however, I was struck by brain infarction in September 2013. All I can remember is that I fell down just outside my washroom, my small dog barking like a ferocious beast. A handyman who’d been to our house just happened to be at our neighbour’s place, and he rushed over and called an ambulance, determining that he’d better not move me around. While waiting for help, he wrapped me in a blanket. I do not have any recollection of what happened after that. I don’t remember being taken to hospital, which hospital it was, nor how long I stayed there. However, had help been delayed by even one hour, what would have happened to me? I had a narrow escape. My lifesavers were my dog Coco and David the handyman.

After the stroke, I did not really exhibit the telltale physical effects. My limbs did not show paralyses and I was able to talk almost normally, albeit slowly. Doctors and social workers recommended stroke rehabilitation, so I bought some exercise equipment and I followed the instructions for a while. However, I had no appetite whatsoever. Most painfully, I could not sleep at night. I lost weight and at one point was only 99 pounds. I was hospitalized again and diagnosed with anorexia disorder. I didn’t know what was happening and I even had to ask nurses, sympathetic visitors, and my live-in maid what my symptoms were. Some people, seeing my hollow eyes and drastic weight loss, thought my situation was dire. A Japanese friend sent an email to Japan to say I was critically ill, and an old friend rushed to Canada to see me.

I became moody, apathetic and lethargic. I had no interest in anything and I could not eat. After I repeatedly told my doctor that I could not sleep at all, she suggested I think about positive and fun things as much as possible, have fun-loving and vivacious friends come over to my house, and move my body, telling me that people with anorexia disorder tend to fall into depression. With a lot of antidepressants prescribed, I started to feel a little better. However, as though I was taking sleeping pills, I was sleeping all the time.

I was quite depressed for six months or so. Even having my dear Coco and my son, who was genuinely worried about me, around me at home was a nuisance. I apparently told acquaintances and friends who came to see me that I did not want to see them, which was very abnormal behaviour for me. My negativity and depression continued with no sign of recovery, and I had no choice but to accept a third hospitalization.

With my mood down and my body dull, I could not bring myself to enjoy anything at all. When such a condition continues for a prolonged period, accompanied by mental and physical stress, disorders in brain functions can result.

I often felt dizzy and complained about it to my psychiatrist every time I had a counselling session. The doctor recommended 12 sessions of Electro Convulsive Therapy. Twice a month for 6 months, I attended a downtown clinic, where I was quite taken aback by the number of young men and women who were also patients and who, at first glance, did not appear to be depressed at all. I have no idea how the treatments were supposed to work (as I was asleep in less than a minute after getting an intravenous injection). I was not allowed to eat or drink for 24 hours after each treatment, which left me quite thirsty and hungry. This seemed to trigger my appetite and I was ready to devour anything.

I was finally discharged on Jan. 28 of this year.

I love to talk, so I started calling my friends one after another. I felt like eating and dining with them just as I had before, and I invited many of them to Katsura Restaurant at the Prince Hotel whenever they were available. They, in turn, drove me there and back. Although I could not appreciate the different tastes of the food, it went down my throat effortlessly. I felt quite happy and enjoyed these occasions after such a long time.

Porridge was really delicious. Fruits were also tasty and I could appreciate and admire the flowers that were in full bloom in the garden. It came to mind that when I had started going downtown it had made me feel great, and I began to accept invitations and started going to the parties.

In September I realized that it’s been a full two years since I became ill. Although getting old and being sick has tormented me, my body and spirit are still intact. I feel I am gaining strength little by little. I weighed 99 pounds when I was discharged from the hospital, I now weigh 125 pounds, which was my weight before I got ill. (I now need to consider dieting seriously…I cannot afford to gain any more weight.)

Besides chatting, my other favourite activity was driving around in my car.

Unfortunately, I no longer have a driver’s license. And I hear that it is rather difficult to pass the test when you are over 80. To my surprise my live-in maid offered to drive our leased car. It’s a bit scary being in the car with her, as she told me that she had just learned to drive recently, practicing for about a month while she was in the Philippines. I really appreciate her gutsy attitude, however, and I am happy that she has given me a means of transportation when I need it. I will enjoy our rides together.

I am so lucky. I have survived the ordeal and returned.

To live to a healthy old age, one needs to have nutritionally balanced food, drink a lot of water, sleep well, and lead a cheerful life without getting angry or offended.

Demand For Japanese Interpreters in the Community
Community News