Skip to the content Skip to the Navigation
JSS Newsletter Vol. 3 No. 2 May 2015 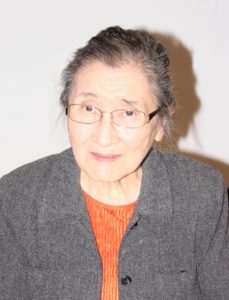 Being born in the 1930s, I find that what most people would regard as history, remain very current and active in my mind. When the media, for example, comments that it is now 70 years since the end of the Second World War, my initial reaction is to be shocked by the passage of time and feeling very old. But such comments also serve as a trigger to reflect upon what was taking place in my personal life at the time. I would like to share with you some of my recollections, and some of my thoughts relating to Japanese Social Services.
I was born in Vancouver, B.C. and spent the war years in the internment camp at Lemon Creek, B.C., with my mother and two brothers. My father who was in Angler, Ont., joined us just in time to go to Japan in October 1946. I had just turned 13, the age when peer relationships become increasingly important. However, friends were difficult to come by except within the school setting as girls my age were expected to help at home, not in socializing. In hindsight, I was fortunate in many ways. It gave me time to practise Japanese (especially Kanji or Chinese characters) so as not to disappoint my homeroom teacher who gave me extra coaching after school using a Grade Three textbook. It also allowed me time to become immersed in a traditional, rural environment. These were the days before rapid social change. Expectations and roles tended to be clearly defined which helped in the adjustment process. By the time I left for further studies in Tokyo, I felt quite comfortable in identifying myself as a person from Okayama-ken.
It was during the four years I spent in university that my vague wish to work with people became crystalized. Since a child in Lemon Creek, I had admired the work of the missionaries whom I met in Sunday School, knowing they were there to teach in high school because the government refused to do so. I had also read stories about people helping those in need and had an immature, romantic notion about being able to do so myself. The impact made by the teacher who gave me special lessons was also great. Contacts in the university made me aware that there was a profession called social work and pursuing it eventually brought me to Toronto.
As a social worker, I have had the opportunity to practise or teach social work in various countries, including Japan. This was in the mid-60s when social work and counselling was virtually unknown in Japan. Problems were supposed to be dealt with within the family and never with an outsider. It took a long time for any working relationship to be established, if at all. I understand things are now changing. I was also in Ghana for 15 years with my Ghanaian husband whom I met when we were both students in Toronto. I worked in a government social welfare department during this period.
A social worker functions in all types of settings such as in hospitals as a member of the treatment team, in government departments dealing with social policy and its administration, and in agencies like JSS established specifically for providing services to people for various reasons.
Having experienced all of the types of settings mentioned above, I am conscious of a distinct advantage a small agency like JSS has. It is better able to respond to needs identified in the community unlike the bureaucratic systems found in hospitals, government departments, and large agencies. Needs change over time and new needs are identified. Timely decisions on whether or not to deal with these needs are crucial for the agency to remain relevant. For this to happen, an agency with its own Board of Directors, especially a Board that is active and well-informed is indispensable. I have always regarded the JSS Board to be active and supportive in this regard.
The services offered by JSS are the result of the dedication of volunteers, not only of the Board members but other volunteers who are directly involved in the operation of the programs, in the smooth running of the office, in translating materials, and in other diverse ways. If not for the volunteers, most of the programs would not have taken off. Financial constraint makes relying on their goodwill inevitable.
I would like to end by mentioning that the volunteers can also benefit by knowing that they are helping others which can boost their self-esteem. In an agency like JSS there are further benefits of being able to communicate in Japanese, form friendships and feel less isolated. I shall always cherish my years as a volunteer as I do the many years I worked as a social worker.
Note from the Editorial Dept.
Ms. Peasah is scheduled to receive a Consulate-General’s Commendation at the Consulate General of Japan on June 2nd 2015, in recognition of her many years of volunteer activities and counselling work and contributions in the Japanese Canadian communities.