Skip to the content Skip to the Navigation
JSS Newsletter Vol. 6 No. 2 July 2018 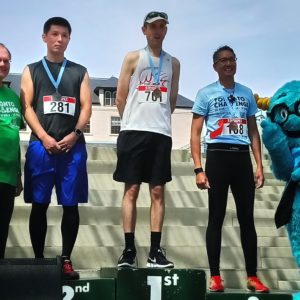 Learn to Run a Half or Full Marathon
In our March issue, in preparation for the Toronto Challenge we gave you a training schedule to help you learn to run 5K. The Toronto Challenge was a great success.
The Scotiabank Toronto Waterfront Marathon is our next big challenge. As promised, we interviewed our resident running expert and counsellor, Takanori Kuge for tips on how to go from running 5K to running a Half or Full Marathon. We hope Kuge-san inspires you and that you will join us on October 21st at the 2018 Scotiabank Waterfront Marathon.

When did you run your first marathon?
I started running in June, 2013. That year I joined Toronto Challenge for the first time and could not achieve my personal goal of 20 mins for the 5km race by 20 seconds. This experience prompted me on intensive running.
From then on I started training for long distance running almost every day – 5, 6 days a week.
I started with 2 km run. 2km became 3 km, 3 km became 5 km and 5 km became 10 km. Within a couple of months, it became easy for me to run 10km every night. With the consistent training, running 15km 5 nights a week became my routine.
In the end of summer 2013, I became confident enough to join the half marathon. I successfully finished the half marathon in Scotiabank Waterfront Marathon. It took a bit less than 100 minutes.
It was quite enjoyable. And I decided to participate in a full marathon next year.
I kept training myself consistently and enrolled myself for the full marathon in the Scotiabank Waterfront marathon in 2014. I finished the race in about 3 hours and a half. It seemed I had enough training for a full marathon so that I still had a lot of energy when I finished the race. But the sense of achievement was really big.
How did you feel as you were running your first marathon?
While running, I kept thinking why I’m doing this and why so many others even pay to experience this agony.
How did you feel when you completed it?
Although I was not super exhausted in finishing my first full marathon, the sense of achievement was really big. Running 42km is an undoubtedly tough task for anyone, I guess. When I finished the race, I understood why we were doing this. The great big sense of achievement & relief, as well as the sheer and pure feeling of “I wanna praise myself,” which we do not feel much in our daily lives.
How many marathons have your run now?
Full marathon – twice, half marathon – twice, 80km trail running race – once, 50km trail running race – once, 66km trail running race – once, 30km trail running race – once
What training advice do you have for someone who wants to run a marathon?
Running is great as you can practice at your pace, anytime, without any expensive equipment. What is great about running is that you can clearly feel the sense of improvement if you keep training. The more training you have, the longer you become able to run. The more training you have, the faster you become able to run.
In terms of the speed and time, you will hit the wall eventually. But the distance that you can run and the pleasure that you get from the running is almost limitless.
Personally I feel that there is a BIG GAP between half marathon and full marathon. And becoming able to finish a half marathon race is not super difficult even for people in their 40’s and 50’s. So I think the first big goal for the beginners had better be to complete a half marathon.
The most important tip for beginner runners would be keep running at your comfortable pace so that you don’t have to stop or walk before making your goal.
Using a GPS running watch or a running app for smartphones can enhance your motivation to keep running. With them you can really see, track and manage your running activity – distance, pace, elevation and so on. Some gadgets can track your heart rate as well. These gadgets really increase your motivation and fun level when running.